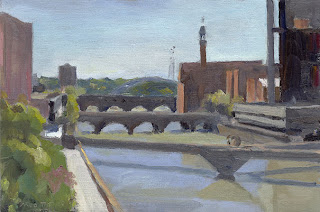 Although there was endless excellent subject matter to be found in smaller scale scenes I saw while walking around outside the apartment -- flowering trees, shadows across back alleys, ducks on the river, cars parked in front of stores and pizza stops -- I had trouble resisting the allure of the big view. Anyway, how often do you get to look at something like this from your living room?
Of course the whole view is much more vast than the section I chose to paint -- and focusing in on a workable composition was the big challenge.  Painting it was also a challenge.  Maybe because I'd done a similar scene the day before, I was a bit more relaxed for this one and more comfortable simplifying what I was seeing into color shapes: 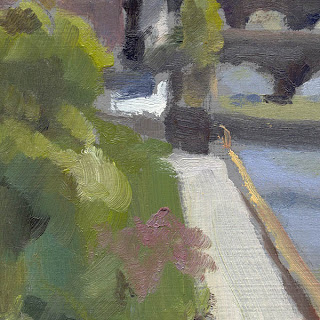 By the way, you can click on any image to see an enlarged version. 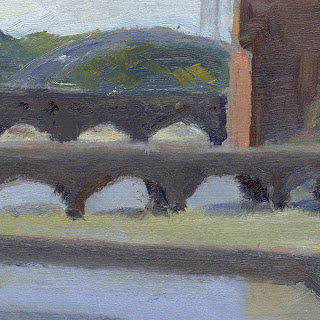 At night I went back to the same basic scene, except with a wider scope.  While working, the dabs of paint on the tiny black panel seemed much too simplistic for the effects I was seeing -- lights shimmering on the water, etc. -- and ridiculously out of scale with the immensity of the city at night. 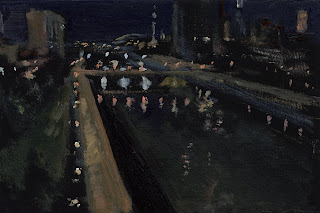 But, still, painting allowed me to show some appreciation for it all. And the little marks convey honest interest and response. That's a lot of what art's about for me. If the painting also suggests the scene in a pleasing way, so much the better.  I most like the shadow on the murky river (cutting diagonally up form bottom center). 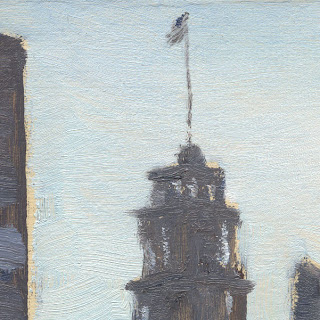 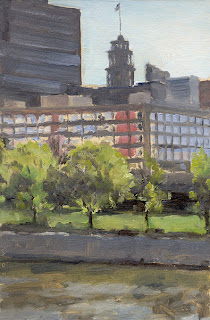 Incidentally, while sketching and taking photos on Andrews Street, I forgot that I might raise alarms for guards at the Federal Building.  A man milling around taking notes and continually stopping to set down a suspicious parcel (a calzone from Pizza Stop) and snap photos must have looked like a potential security threat.  The guard who came over to talk to me was commendably polite and open minded, although I was told not to aim my camera at the building.  Apparently sketching and painting are OK, though.
(SEE PREVIOUS POST for the first half of this stop). 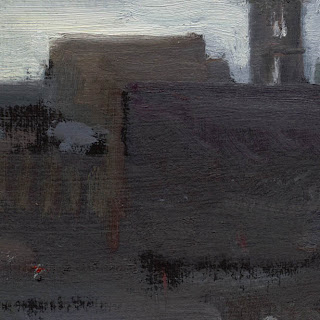 (a detail from the first painting I attempted, which is described a little further on...)
From my first stop in semi-rural Pittsford to a 5th floor apartment on Water Street, in the heart of downtown Rochester was quite a shift. For further contrast, my second stop was a solitary venture.  Host Joseph Becker was on hand only in spirit, having left town on business for a few days.  Usually I prefer company on tour; the interaction is a big part of why I do it. And I'm more productive when I don't have to think about cooking. But the views were good and the apartment more comfortable with just one person on hand at a time. 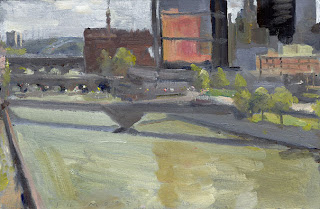 Visually, I like urban landscapes for their hard geometries, tightly knit perspectives, the patchwork of distinctive textures, surfaces built of stone, brick, glass, concrete. I especially like bridges -- in my youth I considered becoming a civil engineer -- and although my treatment of bridges and buildings is loose and impressionistic when I paint, I think pretty carefully about their construction and arrangement.
My second painting shows four bridges and some familiar downtown buildings (one seen only in rather gaudy reflection).  This detail (below) shows a bit of the Sister City Bridge. I rely much more on suggestion than delineation in my painting.  It was fun trying to "capture" an array of international flags with quick, tiny dabs of paint (click to enlarge any image): 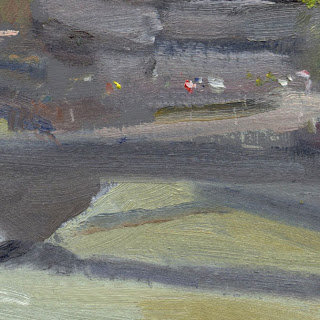 Looking around and sketching downtown can be very stimulating. Painting in a city, however, tends to take a lot out of me.  This is especially true when I'm faced with a panoramic, high-angle view -- however exciting -- and trying to turn it into 6" x 9" compositions. I had some trouble with my first attempt: a view west toward Downtown United Presbyterian Church.  Mainly, I'm not sure my suggestion of glare on a rubble-filled lot alongside the river contributes to a coherent sense of actual space.  Hmmm. 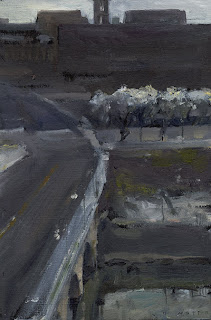 Even if I'm just suggesting most of the details in a scene, or going for abstract composition, everything has to fit together right (more strictly so than in natural landscapes, where everything is flexible).  Urban complexity is very different from the complexity of nature.  In both settings I try to incorporate what I see into a sort of spiritual or poetic whole in the painting.  I find it more challenging to succeed in the urban environment, except at night: 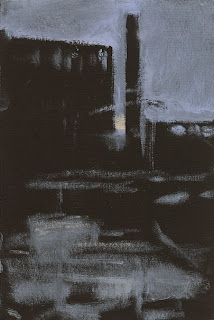 Night simplifies everything. This third painting of the first day (above) shows the view northwest, across the Inner Loop.  It was done about 2 a.m., and I was too sleepy to finish it.  Still, some people who have seen my Water Street paintings in person like this one the best. Like sketches, unfinished work often shows more of the raw energy of intitial inspiration, of instinct and process, than can be seen in more developed, "finished" work.

(this post continues at: WATER STREET PART 2)
Posted by Jim Mott at 9:43 PM No comments: