.
"This is the strangest painting stop I've ever made," I said in greeting, as Bill met me at the door of his Pittsford house. Strange because it was so close to home: I'd gone to the same high school as my hosts, Bill and Laura; and they live in a small housing tract just a stone's throw from my old junior high school - and not much further from the house where I'd spent most of my life.

Plus, at our level of acquaintanceship it would have been much more normal, natural, and appropriate - at least by conventional standards - to be meeting for dinner somewhere. Instead I had my duffle bag full of stuff and was moving in for a few days. (Bill, among other things, plays lead guitar for the Chinchillas).
After a tour of the lawn and garden, I met the two cats and the two kids - Patrick and Simon. This was my 1st local "tour" stop with children in the house. On other tours I've always liked having youngsters around.

This was no exception, except that my guest room turned out to be Simon's. I didn't mind his Sponge Bob sheets or anything, but had to wonder if he resented being displaced. When he responded well to my painting of a plastic pink flamingo a couple of days later I sensed that, if there had been a problem, I was at least briefly forgiven. Later Simon showed off some of Patrick's very cool artwork. It's nice to be accepted by younger people. But still, as curious as it felt for me to be moving into a house a few miles from home, it must have been curiouser (to borrow a word from Lewis Carroll) for Patrick and Simon. 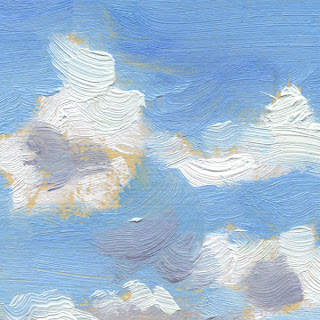 Bill, meanwhile, seemed to think I'd be painting mostly around the house, yard, neighborhood... which is what I sometimes do. But I had come already knowing that I wanted to spend my time painting the rolling farmland of south Pittsford. Just a quarter mile away, big puffy clouds were floating over wide fields striped with greens and the bright gold of freshly cut wheat stubble. Off I went to get a painting done before dinner. 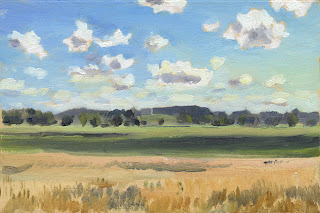 This is the 1st painting I did at this stop.  I only had about 45 minutes, so it was hastily done.   The next image is an enlarged detail from the painting (as is the previous bit of cloud): 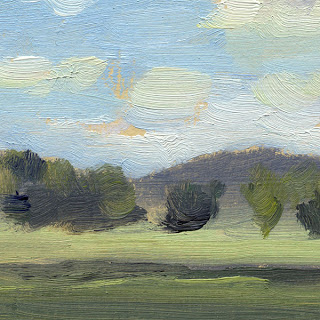 Speaking of intentions, I'd timed the stop to coincide with the full moon. I didn't just want farmland but to be out near the farmland when the moon was brightest. It's the sort of thing - especially with my own house closer to the city, that I dream of: easy access to moonlit countryside.

I have something of an obsession with the moon. After dinner I rushed off to see (and quickly paint) the moonrise. 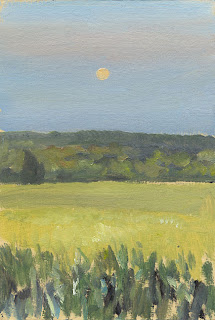 And later still, when all the neighborhood was getting ready for sleep, I went out to observe the effects of moonlight on the tract houses and their lawns and driveways. I walked around for quite some time, sketching and marveling and seeing not a soul. What could easily be described as an ordinary setting during the day became a realm of mystery and wonder - even moreso because of the contrast with how most people conventionally view such a place (even those who live there and like it; even me two hours earlier). I felt like waking up everyone in their sleepy houses and telling them to come out and see where they lived: not in suburbia but in an amazing universe. 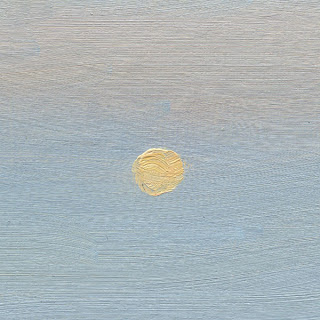 (The sense of being a lone witness was happily banished the next day when Laura later told me that she and some friends had enjoyed a similar walk with similar feelings some time ago).


Unfortunately, my late night inspiration didn't translate very effectively into art. Maybe because I was too sleepy. Maybe because Bill was still up watching TV, and I got too caught up in an episode of Futurama to concentrate on painting. Maybe because painting night scenes isn't always easy. But I made a try at it. One can sometimes learn by trying: 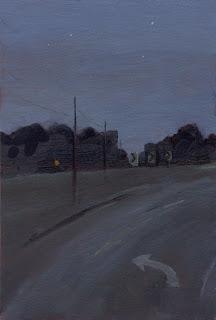 On the second day I started to do stronger work. I'd come to paint picturesque farmland and was surprised to get better results by sticking around the house, doing a painting of the front window and garden; a painting of the pink flamingo who resides in the backyard hosta patch (see painting at the start of this posting). 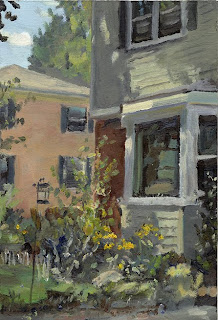 As Bill sort of had to remind me, this is how the project is supposed to work. My hosts' world turns up new and unexpected subject matter; new things provoke fresh creative dialogue. Turning life in a subdivision into a painting may take more conceptual effort than painting a pretty field, it may force me to give more of myself to the enterprise.

That evening, Laura and I went to a nearby hilltop to watch the full moon rise. It was a highlight of the visit, but I decided not to do another moon painting. 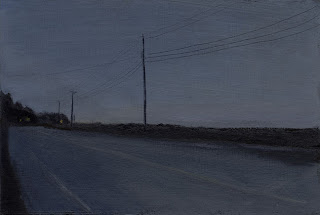 For my third painting on the second day, I went back to open space and night, but with more conviction and confidence and better energy than the day before. Also, Bill and I were watching Jon Stewart while I painted. Maybe that helped.

Using a black panel, I could suggest the telephone lines by scraping into the blue-gray paint with the sharp end of a broken paintbrush. This technique can make a painting a lot more interesting or ruin it in a few seconds.  Here's are two close-ups: 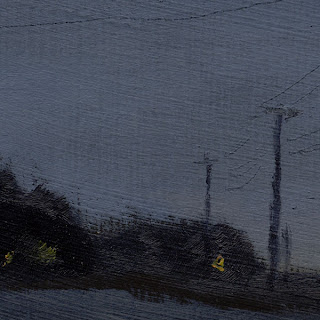 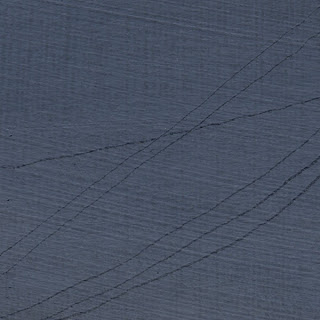 Choosing what to paint is almost always a big challenge. At home I seem to spend most of my time trying to decide what to paint. On tour, I force myself to spend more time painting than choosing, but by the last day I always have such a backlog of ideas that the strain of choosing often shows. Sometimes the last few paintings have a special intensity of very focused, direct action (see my 1st stop), but if my focus doesn't hold, they instead show signs of indecision and scattered energy.

The three paintings from the third day are a mixed bag. The sky paintings were meant to convey my fleeting sense that the big puffy clouds floating over the little houses carried some sort of judgment. The contrast between the clouds' grandeur and out little lives below could be uplifting, but I decided it should have an ominous edge...and painted too much darkness into the clouds. 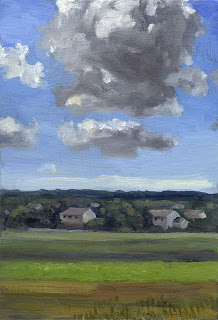 On reflection, I think the dark gray in the big cloud sits too heavily, but the next close-up shows a part of the cloud where the paint still has lots of life: 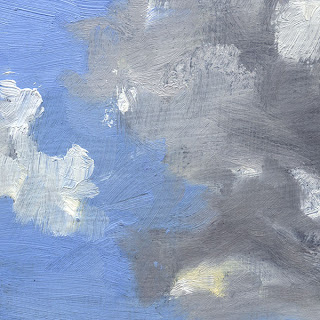 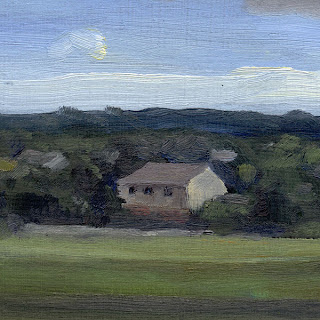 The second "house and ominous cloud" painting was done after I'd taken a small tour of the Mendon Center Elementary School grounds - which are located right behind this house. 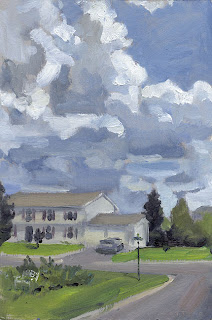 Incidentally, my school tour consisted of jogging barefoot around the playground for 10 or 15 minutes.  35 years ago, when the place was a junior high school, a friend and I got out of dodgeball and baseball by running during gym.  We ran outside, even during thunderstorms, and our classmates probably thought we were odd, especially when we stopped wearing shoes.  At age 49, I may have appeared even odder, but my feet and the grass enjoyed a 35 year reunion. 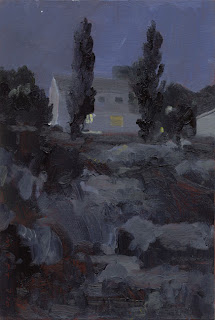 Speaking of the past, this last painting (done from sketches made the night before) was an attempt to recapture something I'd seen in the same place several years ago, when the houses were new. The trees had filled in, though, and I couldn't find the right composition.  Insistent memories can be turned into strong paintings, but sometimes they distract from the process of seeing what is at hand.
Posted by Jim Mott at 10:19 PM 1 comment: