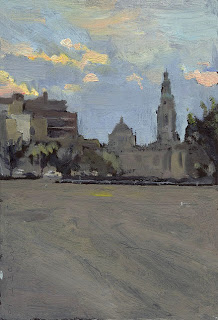 Having a mentor can be a good thing.  I think this is especially true in a field such as fine art, where the “career path” is not at all clear, the incentives are mainly internal or invisible, and it’s easy to feel lost when just about everyone else you know seems to be moving through the game of life more briskly, with the reassurance of collectively valued trappings: job, salary, family, retirement accounts, etc. 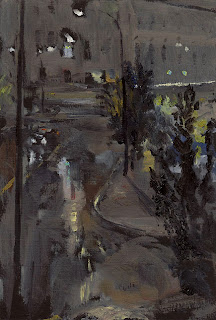 In my efforts to follow an artistic path, I‘ve often been sustained more by the assurance that someone understands what I’m doing than by anything else.  As Mark Twain said, “I can live for two months on a good compliment.” Good criticism can be useful, too.

I’m fortunate to know people who care deeply about art and whose insight, wisdom and interest have helped to keep me going – not only lightening my spirits but helping to illuminate the way.  A few of these people may even understand my art better than I do.  At least I like to think so sometimes.

For example, I was feeling discouraged by the results of my 7th ROC-ART stop – at a residence on Gibbs Street – until I showed the paintings to Jeff Ureles.  Jeff is someone who can see a landscape painting I’ve done and tell me what philosophers I’ve been reading (or should be reading).  When he looked over the set of Gibbs Street panels and declared them among the better paintings I’ve done lately…I decided to believe him.  Although by “better” he may just have meant more alive with creative struggle. 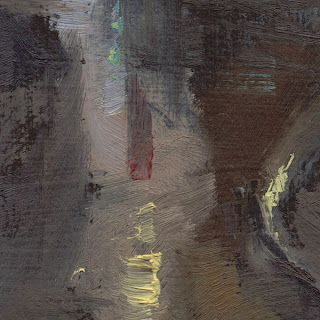 Shown here (above) is an enlarged detail from the second painting I did at this stop: a rainy night scene done on a black panel.  The detail shows how loosely I was working. The painting shows more or less what I was seeing from the guest room window around 11 pm my 1st night.  However, what had really caught my interest was the pattern made by lamplight on the textured sidewalk, so I tried again: 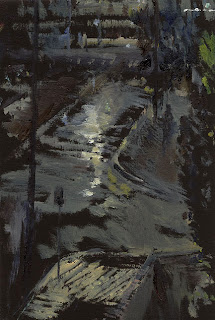 This second night scene was rushed; I was too tired to focus and wanted to get to bed (although I was also avoiding trying to sleep because I didn't think I'd have much luck - too many loud vehicles, car doors, a student outside my window playing harmonica).

Since I was staying near the Eastman Theater for this stop, I might be forgiven the presumption of invoking the names of Mozart and Beethoven when discussing my painting process.  It’s only because I found this wonderfully insightful thought in a recent music review:
A composer’s greatest achievements are often inspired as much by his [or her] deficiencies as by his natural talents.  Beethoven [did not] have the easy facility for counterpoint that Mozart possessed, but… it seems to me that his difficulty in working it out is perceptible to listeners, and this gives his counterpoint a force that we find nowhere else, as if we experience the willpower necessary for its conception.

Charles Rosen, New York Review of Books 12/13/10
Similarly (though on a much humbler scale, of course), I tend to think that the emotional or spiritual content that some people notice in my paintings makes its way in not as the result of any skill I possess, but through the struggle involved.  My perpetual sense of not knowing what I’m doing when I’m painting can be very stressful. However, it may allow something into the work that’s better than anything I could control.
Not being in control or finding oneself in unfamiliar territory (external or internal) can feel threatening, but such states can also call forth the creative self’s best energy.  I guess that’s one of the main ideas behind the Itinerant Artist Project.  Yet in painting I still tend to want control and to resist disorientation.  When the painting process gets the better of me on both counts, it usually takes me a long while to feel at ease with the results, even if they are interesting. 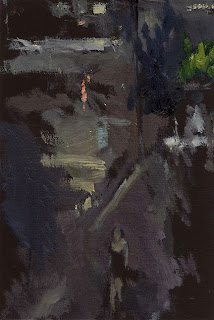 But I digress – and have failed to even mention my wonderful hosts:

Tom and Marianne Kroon were among the very first people who offered to be hosts for my 2010 ROC-ART project.  I believe they saw my December ’09 IAP exhibit at the Mercer Gallery and responded to a notice on the wall about my plans for a local “tour.”  The offer was made irresistible by their address.  Unlike many of my friends, I don’t get to the Eastman Theater or Java's very often, and when I do I don’t tend to cross Main Street.  So residential Gibbs Street  was an exciting and novel prospect.  It also made clear early on that my project would indeed take me not just around the county but into the heart of downtown Rochester.

As some of my previous stops show, I like urban subject matter.  When I finally made it to Tom and Marianne's, though, I had trouble figuring out what to paint.  I felt very much at home with my hosts but could not come to terms with the surroundings.  Maybe my energy was just low.  At any rate, all else being equal, I decided to make the most of the comfortable chair and table in my guest room and did most of my paintings looking out the window - first at night, and then in the daytime: 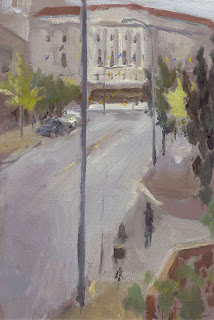 It made sense to paint the Eastman Theater, an important landmark that was staring me in the face.  As a painting subject, though, it was awkwardly situated – a grand structure spread across the end of a small street. And the perspective was tricky. There were students walking by at all hours, even in the rain, so I painted them, too. That was another challenge.  People rarely find their way into my paintings, partly because I want to focus on the abstract poetry of landscape or present it as a contemplative setting; people introduce a narrative element that can interfere with that.  But it's also true that I don't have much practice painting people, so it's safer to leave them out.


In the end, though, the difficulty I had with the surroundings forced me into a position where I was willing to take some chances and work a little bit recklessly.  That's probably a very good thing, even if it was uncomfortable at the time.  By the same token, these could become some of my favorite paintings from the ROC-ART "tour" – once I can associate them with what I gained rather than the discomfort of the experience.

Meanwhile, back in the Gibbs Street neighborhood, I finished up by grounding myself in a simple, straightforward scene: 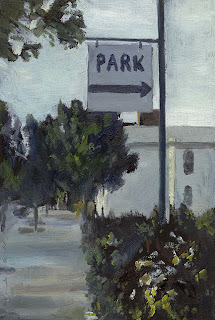